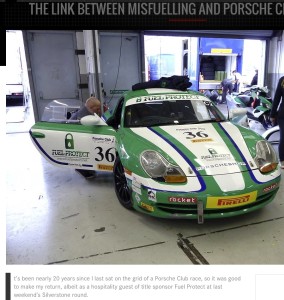 Round Three and Four of the Fuel Protect Porsche Club Championship with Pirelli saw full use of the GP circuit at Silverstone on 20 June.

An impressive range of Fuel Protect-branded Porsches were fielded for Race Three and Four at Silverstone, with 996 C2 winners and runner-ups, joined by Boxster and Cayman Ss.

The two races, sponsored by insurance package Fuel Protect, were won outright by Craig Wilkins and Pete Morris, both in 996 C2s. Jonathan Evans took his first and second Class Two wins in his Boxster S, whilst the Bill Taylor Memorial Trophy, a handicap event rewarding consistency of pace over qualifying and the races went to rookie Nathalie McGloin, at just her second race meeting.

“Despite the weather conditions, both races were competed with verve and determination, said Auto Fuel Fix MD Bruce Compton, who presided over hospitality at Silverstone. “This sponsorship continues a long history of promotional activities with race-prepared Porsches and Porsche track days carried out by Auto Fuel Fix, which, as the UK’s largest independent roadside specialist recovery services, attends all mis-fuelling incidents covered by Fuel Protect.”

Fuel Protect addresses the risk of mis-fuelling incidents, substantially minimising both costs and consequences, and provides cover for just £20 a year. Under Fuel Protect’s insurance, Auto Fuel Fix specialists ‘race’ to the scene, drain the contaminated fuel and ensure that the vehicle can be restarted to continue its journey with minimum inconvenience, waiting time, costs and further damage.

Slippery conditions due to the light rain made it challenging for participants to battle it out: Wilkins made the best start, with McAleer, Morris and Harrison staying as the front four, after Duckman went onto the grass, losing places.

The big changes at the front happened on lap eight, Morris going inside McAleer only to slide wide on suspected fluid down on the track – possibly from Evans’ Boxster which had lost its power-steering, touching McAleer and sending both 996s down the order. Harrison moved into second with Johnson up to fourth, and closed on the leader in the final laps only for Wilkins to hold on for the win, Harrison second and Johnson third with Morris and Duckman next up.

In Class Two Evans led well inside the top ten overall for the entire race, but had to battle with the loss of his power-steering in the final laps, to take his maiden Class Two win.

The track was wet and slippery again for Race Two and the field got safely through the first corner but chaos reigned as they reached Becketts, sending Harrison spinning, Wilkins doing so in avoidance. The order at the front was shuffled: Morris emerged ahead at the end of lap one, with Winter second, ahead of Duckman and Johnson, McAleer right at the back after being knocked off in a separate incident at the end of the Hanger Straight.

Morris eased away at the front as Duckman closed on Winter chasing second, while in Class Two Evans, still without power-steering, headed Speed and Toon. Winter was working hard to defend from the rapid Duckman, when the Safety Car came out as Hugo Holmes went off with a suspension failure at the end of the Wellington Straight.

When racing resumed Morris made the perfect restart to open a gap again, and the battle was resumed behind as Duckman and Winter put on a spectacular dice using all the wet track, seeking grip. Morris took his second win of 2015 with Winter just holding Duckman and Johnson fourth ahead of Chris Dyer.

Evans held sway in Class Two for his second win of the day. He also won Driver of The Race (Two). Speed held onto second this time, ahead of Toon.

Fuel Protect Porsche Championship’s next appointment is at Donington Park, on July 11.